Twenty five years ago, on May 11 1995, I stood on earth’s highest point and looked southwards. My journey to the summit of Everest had begun a few months before, well beyond the wall of pre-monsoon thunderheads that obscured my view of the lower foothills and distant plains, in fact it began all the way down to the far edge of those plains on the sea on the shore of the Bay of Bengal. Psychologically, the roots, in part, to that journey went back to various bookshelves that I’d perused as a child. Then, as now, my eyes would invariably rest on a title that suggested exploration – particularly if it was in the realm mountains. My avid reading on the subject spurred me on to  dream about and eventually take an active part in discovering the mountain world for myself. That journey of discovery quickly led me to the Himalaya – in so many ways the ultimate mountains on earth – the tallest, most extensive and being closer to the equator, the most interesting mountains on the planet.

One of the most interesting and picturesque aspects of the Himalaya is the transition between the high foothills and the big peaks – I call it the tilted landscape because if you look along the axis of the mountains, the horizon is always tilting sharply upwards towards the icy giants. Here camp near Ramdung, Rolwaling Himal, perched high above a sub valley leading down into the lower hills and the haze generated by the millions who live on the Gangetic plain to the south. The snow is the result of an autumn low pressure system that pushed north out of the Bay of Bengal.

My bookshelves are now full of mountain exploration books – a more than adequate quantity and variety to inspire a child’s imagination but the question that springs to mind is; do young people today take such inspiration(in whatever their personal interest may be) from books or has that world been subsumed by the more instantly gratifying, attention grabbing, fast paced realm of online videos – where millions of uploads of radical moves and thrill seeking stunts fiercely compete for the momentary attention of our brains so easily overloaded by the saturation bombing of information? And does this fast paced medium foster and nurture a fertile imagination capable of focusing and dreaming about meaningful and achievable goals?

Crossing a 5300 metre pass into the Rolwaling valley, south west of Everest, Nepal. The snow (from that same system) is thigh deep and will last well into winter because the slope is facing north.

There’s no doubt that having information so easily accessible is one of the great benefits of living in the modern age but the sheer volume of information can easily become a burden. Of course with discipline you can escape this world of information saturation but it takes conscious effort. It is easier and occasionally beneficial just to opt out from time to time – as I do – and go ‘bush’, be it the actual bush or the mountains. The most restorative break is the one that is a total shut off from your regular life – most especially these days, from the electronic noise that is all so pervasive. The easiest and most restorative way to do this is to head out into the wild blue yonder, off the grid and out of touch except for the emergency sat phone.

With common sense it is possible to compromise and log on from time to time to make sure your responsibilities back in that other world, the responsibilities that give you the means and make it possible to escape are running smoothly in your absence. It’s well known that after I came down from my sea to summit climb, I started the equipment business Sea to Summit with climbing friend Roland Tyson. From early on we made it a tradition to head out on extended trips in to the extensive, magnificent wilds of Western Australia. With a growing international business to keep on track, on more recent trips we have taken along a compact satellite communication system that allows us to check emails – not daily but every few days and this achieves a balance between staying plugged in but not out of touch so much that you begin to worry if everything is alright.

Our then Sea to Summit warehouse manager, Leon Guy getting reassurance by being told he has an email notifying him that he’s on holiday. Roland on laptop and Penny overseeing.

In addition, I still do the occasional multi week expedition into remote parts of the Himalaya. By visiting unexplored regions to moderate altitude and taking paying, customers who have an adventurous spirit under the auspices of World Expeditions we’ve often been the first people ever to tread in some places. I dream up the route simply by wondering what is in that distant view and then working it out as we go. Of course it never goes to plan and that’s what is exciting about exploration – nothing is predictable, its always exciting, sometime incredibly hard work and occasionally stressful. The hard bits are what you remember as the best experience! For emergencies I do take a sat phone but it is only ever used in major emergencies – the last time to arrange a helicopter evacuation because of a severely injured hand – and also and incredibly usefully, to get up to date weather reports via text!

A couple of the lesser icy giants – Kangtega on the left and Thamserku.

I’m supposed to be in the middle of this year’s exploratory right now but the terrible earthquake on Anzac Day changed those plans. While the area I was planning to visit is well outside the quake zone, the immediate focus has to be on helping with the emergency at hand. All the people who usually help out on these expeditions are fully engaged either in their personal situations or in helping others. Postponing the trip for a year and helping raise money for the relief effort is the better option at present.

A small village north of Jiri in eastern Nepal, not far from the epicentre of the May 12 earthquake, it will almost certainly have sustained damage because typically the houses are built of stone with mud mortar and timber rafters.

Were I to go back to Everest now and walk down into the valley below I would see many collapsed and damaged buildings, I would see people mourning those lost in the avalanche that struck Everest Base camp and those killed in the more recent quake. If I were to travel westwards towards Kathmandu I would see growing levels of devastation. Indeed before long it would become catastrophic with many villages more than half gone and some totally gone with many thousands of lives taken by collapsed buildings and landslides. The wonderful, free spirited people of the hills are struggling to recover and all Nepalis will be deeply traumatised by this most unsettling of natural disasters. Help from outside is coming slowly but the need is great and will continue to be great for some time. The wounded need to heal and the houses, schools and health posts need to be rebuilt – by donating you can help them do this.

For those wishing to donate these two organisations are both very effective: Skytrek; an incredible day in the Flinders I caught my first glimpse of snow-capped peaks and desolate valleys, as the plane approached Leh Ladakh. Ladakh is a... Read More 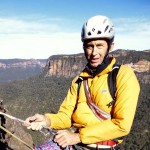 In 1984 Tim, along with Greg Mortimer, was the first Australian to summit Everest. In 1990 he summited again, this time human-powered from the Bay of Bengal! Tim has a passion for storytelling and for instilling his love of the environment. He is the Chairman for Leave No Trace Australia, assists with staff training and the pioneering of new routes for World Expeditions and co-founded the outdoor brand Sea to Summit.