I caught my first glimpse of snow-capped peaks and desolate valleys, as the plane approached Leh Ladakh. Ladakh is a province in the North West of India, next to the disputed area of Kashmir. It has a rich history as an ancient trade hub and is a fantastic fusion of different cultures and religion.

Predominantly Buddhist, Ladakh is the highest plateau in India, with most of it well over 3000m, and a rain shadow formed by the Himalaya creates a high altitude desert.

We had three weeks of kayaking, mountain biking and walking ahead of us, but the first obstacle was the altitude. After travelling from sea level, the difference was immediate. Three flights of stairs in the hotel caused instant embarrassment, as I bent over sucking in oxygen while the housemaid carried my large duffle bag effortlessly to my room.

Some acclimatisation days had us driving around the local area, visiting a myriad of monasteries and marvelling at the feats of engineering used to bring water to the small villages. Irrigation channels initially dug by hand, run for kilometres up narrow river valleys to bring the snowmelt for crops, willow trees and drinking water.

Our first paddle was on a grade 1 to 2 section of the Upper Indus. Despite the easy grade, the power of the water caught some of our group by surprise, resulting in some rapid breathing and gritted teeth.

A second paddle, on a more difficult section, caused a couple of capsizes. Still, we were all slowly getting used to the river’s power. Our guides from Wet and Wild Explorations cheerfully encouraged those who were challenged by the water and quietly extended everyone else. They looked after us with everything on water and off, with a highlight being the hot towels to refresh before dinner.

Wet and Wild also run the Ladakh River Festival, and some of us were lucky enough to be able to take part in the world’s highest kayak race. Traversing some pretty intimidating water on the Indus, it was a kaleidoscope of colour, swims and balls to the wall paddling. Kayakers from all over the world competed for bragging rights and cash prizes, with an overwhelming vibe of friendship and laughter.

Over the next two weeks, we paddled a variety of rivers including the steep creek Hunder, with its beautiful clear water. We walked a section of the old Spice Route and visited remote villages. Yaks grazed on the high grass slopes as we rode mountain bikes down from two of the highest motorable road passes in the world, the Warila and Khardung La. The Warila was almost deserted, with a couple on a motorbike and a lonely sheep herd the only people we saw. In contrast, the 5400m Khardung La was heaving with people, on every type of transport; military trucks, cars, motorbikes, pushbikes and one guy who ran the 39km to Leh.

Acclimatisation complete, we began a three-day journey to reach the focus of our trip, the Zanskar River. Travelling through remote valleys and over high passes, we stopped to admire glaciers and alpine lakes. The severe impact of global warming is evident in the glacial retreat.

Our drivers were fantastic, travelling roads in a 2WD vehicle that we would insist required a tricked-up 4WD. We spent two days crawling in third gear, passing fantastically decorated trucks that ply the road, delivering supplies to our destination, the isolated town of Padum.

The Zanskar River gorge is sometimes known as the Grand Canyon of Asia, and the river cuts a narrow channel through the Zanskar Range. Three tributaries combine to form the river, and this massive volume of water then forces its way down the narrow gorge, creating some world-class rapids. Combined with the stunningly desolate landscape, lonely villages and framed by snow-capped peaks, this is an outstanding river journey.

Over six days, we travelled the gorge, intimidated, exhilarated and exhausted. We camped beside the river and bathed in hot springs, our jaws dropping at the colours and grandeur of the high desert landscape.

Steep cliffs fell into the river, and at one rapid, The Gate, the thirty-metre wide river suddenly narrowed to less than ten metres wide. We paddled this one trying not to think what was going on under the surface, previous swims here have resulted in at least four deaths.

Towards the end of the journey, we came to a road that is under construction. Traversing the gorge, the way is designed to provide quick access to Padum but ultimately will ruin the incredible feeling of being in a truly wild place.

Machines push rubble into the river, and new rapids are formed when explosives bring down cliffs. We paddled JCB, named for the backhoe that lies under the surface, the driver drowned in his cab. Other rapids are Surprise 1 and 2, which appeared suddenly after some road work. Rocks rained down on us, prompting evasive action, as we paddled towards our final night on the river.

The last day was a hoot, with several spicey rapids providing a final fling before the river eased off and we cruised to its confluence with the Indus. As the two rivers mingled, we floated happily to the take out, elated at the journey and the incredible experience we had enjoyed. The final night in Leh was for beers, and booty skols and the celebration of two of the group with a combined 130 years of birthdays.

Ladakh is an incredible adventure destination and if you are a paddler, walker or prefer the two wheels of a Royal Enfield, put it on your bucket list. But don’t forget the Diamox! 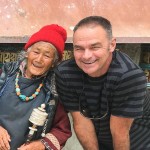 As an outdoor educator, instructor, paddler, hiker and skier, Mark has spent his life in the outdoors. He has paddled the Bass Strait, Fitzroy River, Grand Canyon and is getting through his bucket list at pace.