“Sinuhe, we are in Morocco. If anything happens we’ll just take a taxi back to Lisbon. Portuguese style.” This is what Ricardo Pessoa said quite matter-of-factly after I asked him about spares and recovery gear in the back of the Cool N Vintage D90s we were driving across the Moroccan Sahara. I am used to the full arsenal of what could go wrong contingencies being packed into the back of the truck, this was not the case. Portuguese style was a phrase I would be come very accustomed to in the next few days.

I’d spent the previous 48 hours flying from Los Angeles to Tangiers, then hopping in one of those “Taxi’s” to get to Chefchaouen two hours through fields of olive trees to the mountains south. The rain had started coming down when the cab driver dropped me off outside the city walls, my French and Arabic were about as good as his English and Spanish, so I darted across the bridge with loose directions to my hotel. This was mid January, off-season in Morocco, the narrow streets were empty-the signs in Arabic, it took me more than a minute to find the hotel.

Ricardo had driven from Lisbon, taking the Ferry across the straights of Gibraltar and wouldn’t get in until passed midnight. He brought two Land Rover Defender 90’s with him,  a plan to drive over the Atlas Mountains and south through the Sahara to go back over the Atlas into Marrakech. While I was exhausted from the travel I could barely sleep, driving a Land Rover on the continent of Africa had long been a dream of mine and there I was sitting over a steaming plate of vegetable and lamb tagine in a damp hotel in an ancient village.

The morning was clear and the narrow blue corridors of Chechaouen came alive with the sound of the morning prayer. The smell of burning wood and fresh baked bread wafted into my window. The clouds revealed lush green mountains, something I wasn’t expecting in this part of the world. I later learned that the region was known for its cannabis cultivation.  The rest of the day as we drove east, the topography would morph from verdant green hills to the pine covered mountains of The Atlas. As we reached our 12th hour behind the wheel we came to a road block and were told that the route over mountain pass was closed due to a snowstorm. Back tracking adding two hours and 150kms to our already long day.

The western edge of the Sahara is marked by small villages connected by a modern highway built to spur tourism in the region. To the east the vastness of the Sahara spread across the horizon and to the west the Atlas Mountains sat covered in snow highlighting the paradox of the area. Moving through the desert behind the wheel of Land Rover Resto-Mods was extraordinary, in other parts of the world we are consumed with the efficiencies of travel, how fast can we get to the next place. Here we were cruising along, pulling over to explore a side canyon or photograph the incredible vistas.

We rolled into Merzouga in the dead of night, this outpost on the edge of 100 meter high sand dunes is mostly a tourist attraction where volcanic black sand meets with the orange dunes of the desert. This is the traditional land of the Berbers and their nomadic cousins the Tuareg. Driving through the dirt tracks we passed camels tied to stakes in the ground or the odd date palm. Hidden under the blanket of the inky sky were the mythical sand dunes of the western Sahara.

By this, our third night, I was well adjusted to the time difference and we had settled our routine of checking into the hotel. We would dump our gear, grab a quick shower and reconvene in the restaurant for a drink. Morocco being a Muslim country the cocktail menu is usually pretty limited to Moroccan beer and wine, if you were really lucky there would be Crown Royal or maybe Johnnie Walker. Rehashing the day and looking at each others photos as we downloaded them and waited on our food. We were staying in nice places that Ricardo had researched on previous trips, he has been making the trek into Northern Africa since 1998.

Ever since I was a child the dunes of the Sahara held a fabled place in my mind. So many great films came to mind; Michelangelo Antonioni’s The Passenger with Jack Nicholson, Werner Herzog’s Fata Morgana and of course Star Wars and Lawrence of Arabia. I made my way to the dining room in our hotel anxious to get on the sand, Ricardo had arranged some pastries and coffee for our pre-dawn departure. When he originally asked me to join him on the trip I was expecting to be camping across Morocco, this whole having breakfast made after rolling out of a warm bed was nice. I was starting to understand Portuguese style.

We arrived at the base of the dunes just as the sun was creeping over the eastern horizon. The wet conditions made for nice compact sand and we only had to air down our tires to 21 psi or 1.5 Bar. There is a stillness once you are in the dunes, a quietness like a snowy forest. The tires barely make a noise and all that can be heard is the thump of the 300 Tdi engines. Driving large dunes takes a good deal of finesse and the ability to route find on the fly. There is no direct route anywhere, you follow your instincts and hope you don’t get boxed in. It’s also exhausting. The driving and route finding physically wears on you, not to mention if you get stuck.

When one of the 90s finally did get high centred trying to crest a dune it was easy enough with a snatch strap and two D Rings to yank it out. This was pure Portuguese style and I was really starting to not only understand, but appreciate it. The trucks were light, no winch, no roof top tent, no refrigerator, no pelican case full of spare parts and tools and no camping gear. It was like motorcycle touring with Land Rovers, all you really need is a credit card.

There was something gratifying pulling into Palais Mhedi in Marrakech with two dirty trucks driving through the ornate archways. Three stately Dalmatians were posted by the doors. We were greeted with fresh lemonade and showed to our suites. A perfect end to the trip. 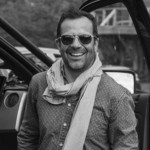 Sinuhe is a photographer, director and automotive influencer who consistently creates astonishing campaigns for the best-loved brands in the world. His 360º approach to content yields a full toolbox of visual perspectives from live action to wide-screen shots for Bentley, Jeep, Land Rover, Toyota and many others in the automotive, film and lifestyle industries. BBDO, TBWA Chiat Day, Saatchi, 180LA and RGA have all tapped his talents to turn off-road adventures into epic print and motion imagery. Xavier has won Clios for his work on Danny Boyle’s film 127 Hours (2010), Wild with Reese Witherspoon (2015) and Nike’s “Speed Drops” campaign (2016). He lives in Los Angeles, ever-ready to head out to the next epic location.