You can get to South Australia’s Vulkathuna Gammon Ranges National Park and the neighbouring Arkaroola Wildlife Sanctuary by bitumen from Port Augusta to the ex-mining town of Leigh Creek and from there via an all-weather gravel road into the Ranges.

We, however, never being ones to go the direct way, opted for the back route, a scenic dirt road with the jagged skyline of the North Flinders Ranges to our left and the vast space on our right shimmering to the salt expanse of Lake Frome. The empty land is as it always was, and space and ruggedness lead the imagination and it really feels like we are in a time machine, not a modern 4WD.

We camped overnight at Italowie. It was April, beginning of the busy season but there was nobody else around. Has something happened to them all? It was perhaps not such an irrational thought as last time we saw any news North Korea had done something and Donald Trump was doing something else. Maybe everyone had gone to hide in their nuclear bunkers and the landscape had reverted to a long-ago time when the worst tool a human had was a sharp rock or a wooden spear.

In the morning we drove to the northern edge of the Gammon Ranges to Arkaroola, a private sanctuary next to the National Park and nearly as big. Arkaroola is a caravan park, shop, and resort with the feel of a working station where everyone has gone somewhere else for the day. Perhaps it is to the bunker? This is spectacular country, but dry, desolate, and it is not hard to imagine post-apocalyptic scenes. Where is everyone?

Arkaroola was established in 1967 by Reg Sprigg, three years before the National Park was declared, and he was clearly a man ahead of his time because he began running eco-tours long before anyone knew what they were.

Arkaroola continues to win awards for the tours, a highlight being the Ridgetop Drive to the top of Sillers Lookout that you can only take as a passenger in their 4WD. If you prefer self-guiding, for a $45 fee you get the key to a gate and can follow a decidedly 4WD track in a big arc around to the east, right through the heart of the rugged terrain. They do stargazing tours too but thanks to the advice of the ranger at Flinders we’d already found the stars by looking up at night.

To book one of these tours, stand in the shop for a while and someone will appear. If indeed they are people. Maybe aliens have arrived from those stars and they abducted everyone and now they impersonate the staff so we won’t catch on about the invasion. Whatever. They are all very friendly and we felt very safe, and I am loving this alien Australian outback.

Back in the National Park, we drove the 4WD loop through the Gammon Ranges that connects Weetootia Gorge to camping at Mainwater Well and then Loch Ness Well. This is a delightful drive, scenic at times and at others a narrow way winding along next to a dry creek, or passing abandoned stockyards made from the raw limbs of local trees. The track is one way to Grindell’s Hut.

There is camping here in the Gammon Ranges too, not crowded (we saw one other car the whole time) but the hut itself is restored and can be rented for short stays and I am definitely coming back here. There are walks from Grindells to Italowie Gorge Campsite – remote, unmarked 8km one way – and other walks too. Or what fun could be had on that loop road with a mountain bike.

But mostly I desire to return, rent the stone cottage for at least a week and discover if it is haunted. A sign tells us John Grindell murdered his brother in law, George Windsor Snell, here in 1913 and there has to be more to this story. For a writer, murder and ghosts are nearly as good for the imagination as timeless isolation. A multi-day paddling adventure with friends down the mighty Snowy River; it’s the stuff of childhood... Read More 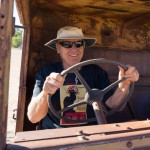 Martin Chambers wrote the Canoe and Kayak Guide to Western Australia. He has been a paddler all his life and recently completed a 30-day canoe descent of the Eg river in Mongolia. Martin lives in Perth and writes full time. His latest novel ‘How I became the Mr Big of People Smuggling’ made the shortlist for the TAG Hungerford Award. The judges said the book gave the uncanny feeling that it could all be true.