Over the past year or so I’ve watched, with great anticipation, the process from conceptual design to prototype to modification and ultimately final production of the brand-new 14’ Silverbirch Firefly.

When it was confirmed mine was on the way from Norfolk, in the UK to Sydney, I nearly jumped out of my seat. I don’t get this excited about every new canoe that hits the market, but it’s the type of canoe that the Firefly was aiming to be that caught my attention. I’ve always paddled traditionally-shaped tandem canoe hulls, such as a Prospector, and I actually prefer to paddle them solo. However, I’m acutely aware of the fact that this is not their intended use and I often end up pushing around more canoe than I actually require.

Only a few years ago, I began to wonder what it would be like if someone made a smaller version of this traditional canoe shape – or what if one was created as a designated solo?! That is not precisely the aim that Silverbirch was taking when they designed the Firefly, but it’s certainly a niche that I believe it fills.

The following is my personal opinion of this new canoe after having paddled it for about 6 months. A bit about me: I’ve been paddling for over 30 years, and the open canoe is my vessel of choice. I’m a professionally-trained and qualified canoeing instructor, and I prefer kneeling and heeling a canoe on its side in the traditional Canadian-style of paddling.

Upon first glance, I was already excited by the Silverbirch Firefly. The quality of finishing is just outstanding. It shows ample rocker which tells me that it will be manoeuvrable, but hopefully, it will still track straight. It is quite slim, which tells me that it will feel sporty but hopefully not too tippy. It appeared quite long, so I expected that it would glide, but the entry-line isn’t overly sharp, so I hoped that it would still cut nicely through the water. It’s quite tall and has a flared bow, so I was expecting that it would handle waves like a champion, but I’m also hopeful that it won’t be too wind-prone. The seat is centrally-located and is tilted forward, which is perfect for kneeling, but I hoped that people would still be able to sit on it comfortably.

After my first paddle, almost all of my concerns evaporated, the canoe performed precisely as I’d hoped. It was evident, as I climbed in, that I was going to be comfortable kneeling in it. The Silverbirch Firefly feels as if it wants to be paddled on-edge and naturally transitions from one side to the other but doesn’t feel like it wants to sit overly-flat on the water.

Before taking my first stroke, I tested how far I could push this edge before it wanted to tip and was amazed that I didn’t find its limit! The secondary stability on this thing is just amazing! As I put in my first stroke, a giant and forceful C-stroke, the canoe rocketed away and pleasantly glided in a straight line. Another stroke got me up-to-speed, and then I put in my first aggressive turning stroke, a Bow Rudder, which caused the canoe to carve a tight and predictable 180-degree turn. A bit more dancing around and drawing/prying back and forth let me know that I could do nearly anything comfortably in this canoe. I wondered how it would go over a distance?

Lightly loaded for a day’s paddling the Firefly cruises along effortlessly. It glides well and responds to your every instruction. It’s so narrow that it’s easy to paddle it in a whitewater C1 style where you put in the occasional cross-stroke or cross-bow draw rather than swap sides. This was especially fun when I first paddled it in a dam full of standing dead trees, and I was able to carve a course between trees that I’d struggle to get a small tandem through.

As a rescue platform, I’ve found that it’s still stable enough to feel comfortable while performing a range of deep-water canoe rescues and recoveries. The interior is spacious and has ample volume for more than a week’s worth of camping gear if needed. It’s even large enough for me to lay down on the floor and rest my head on the seat.

Loading the canoe for a week-long expedition is where the shine wore off a little bit. As I packed in my 30L esky, 35L food barrel, 85L backpack, 20L accessories bag, spare paddle, canoe pole, and 10L water drum I was stoked at how well the canoe took all of this gear and left room for more.

However, 500 metres into this trip, I realised that I was going to have to work hard to keep up with all of the 15’ and 16’ tandem canoes in my group.

This was no surprise as waterline length translates to speed, and I had less of it than everyone else in my group. Also, the rocker that the Silverbirch Firefly has makes me manoeuvrable, but takes further waterline length away, especially when I’m on edge.

In short, the Firefly is no rocket ship when it’s loaded to the gills. This isn’t a deal-breaker for me, though, as this isn’t what canoes are for. If I wanted a lightning rod, I’d be in something 18’ long and made from lightweight Kevlar. If I wasn’t trying to keep up with 16’ canoes paddled by trained tandem paddlers I probably wouldn’t have noticed the lack of speed so much either.

Throughout that 15 km journey, I only felt the urge to sit and give my knees a rest once. The tilted seat, although obviously much more suited to kneeling, was still comfortable to sit on. However, if I were a sitting paddler who might occasionally opt to kneel, then I’d definitely order a Silverbirch Firefly with a flat rather than tilted seat.

The Silverbirch Firefly is incredibly well-suited to moving water as well. It carves beautifully and moves so predictably that I would feel comfortable paddling it in grade 3 rapids. I’ve seen a few in the UK that were outfitted with airbags and thigh straps which would make it a perfect river tripping boat. The Duralite plastic from which my Firefly is made takes every bump and grind from rocks in its stride.

Overall, I am a huge fan of this new canoe, and I can’t think of anything that I would change to try and improve it. It paddles superbly on so many types of water and is a comfortable and responsive solo canoe with high capacity and excellent stability. 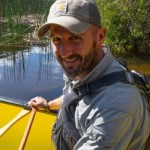 Hailing from New York, Travis has called Australia home from the early 2000s. Whilst accomplished across outdoor disciplines, he is most at home exploring wild places by canoe. An expert guide and instructor, Travis also imports fine canoes from across the world.